From bush to bike - a bamboo revolution 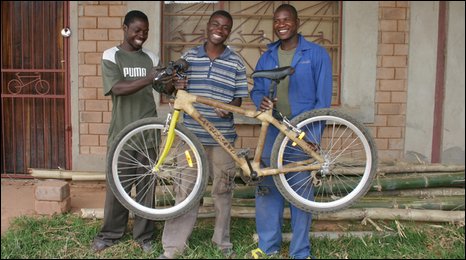 The team at Zambikes with a finished bambo bike. A bamboo bicycle can take over a week to make by hand.

On the outskirts of Lusaka, Zambia, next year's crop of bicycles is being watered by Benjamin Banda.

"We planted this bamboo last year," he says, "and now the stems are taller than me. When it's ready we'll cut it, cure it and then turn it into frames."

Mr Banda, is the caretaker for Zambikes, a company set up by two Californians and two Zambians which aimed to build bikes tough enough to handle the local terrain.

Co-founder Vaughn Spethmann, 24, recalls how it all started with a game of football. 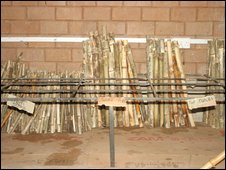 Racks of bamboo. Bamboo is the fastest growing woody plant in the world.

"We were here on a university field trip and we organized a match against some locals. Afterwards we asked them what they did, and they said: 'Nothing'. They didn't have jobs.

"So we decided to come up with a business which would be a source of employment and provide a useful product."

That product was the rugged, bright yellow Zambike, assembled at the firm's smart red-brick workshop set in sun-browned farmland.

Other projects followed as the mechanics' skills improved: a sturdy cargo bike, a bike trailer and a bike-drawn "zambulance", now in use at 10 clinics around Lusaka.

His prototypes proved that the strength and lightness of the plant made it a great substitute for metal.

As a bonus it had excellent vibration-dampening properties, making it comfortable for riding over long distances.

It was eye-catching too - Mr Calfee's stand was besieged when he unveiled his first bamboo frame at a bike show. 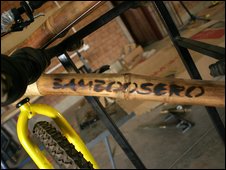 A bamboo bicycle. The bicycles are being targeted at the American market.

Mr Calfee hatched a plan to manufacture the frames in developing countries, distribute them in the US and share the profits.

He had already set up a workshop in Accra, Ghana, and started looking for more bike producers, nicknamed "bambooseros".

The industry telegraph started humming and soon he was talking to Zambikes.

"We were so excited," says Mr Spethmann. "The thought of Zambian-made products being sold in the USA. That just doesn't happen."

There are many reasons why it's so unusual: capital is difficult to raise in Zambia; tools and raw materials - if available - are expensive; skilled labour is in short supply; and bureaucracy isn't.

In this context having a low-cost raw material on the doorstep is a godsend.

"And of course there's very little impact on the environment," says Dustin McBride, the other American on the Zambikes management team.

Inside the workshop, bike mechanic Elastus Lemba is setting up treated bamboo pieces on a jig made from plumber's pipes and bicycle parts. 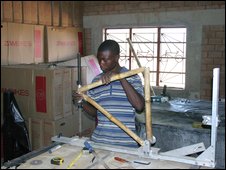 A bamboo bicycle being made. The bicycle-making process has little impact on the environment.

It looks low-tech, but that's intentional.

Mr Calfee wanted a production process that did not require sophisticated machinery.

Hand-making the frames in this way takes at least a week.

After a final sanding and coat of varnish, each batch of bamboosero bikes will be shipped to the USA, tested, fitted with wheels, pedals, handlebars and brakes, and put on sale.

So will the bike be a success?

Mr Calfee thinks so, based on all the enquiries and advance orders he has received.

"Hundreds of people have asked when they can buy one. From a bike messenger who wants an affordable fixie to a wealthy collector who wants one from each bamboosero location." 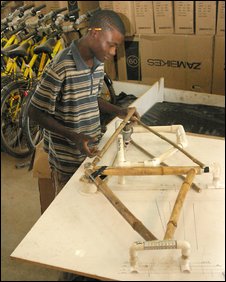 A bamboo bicycle being made. "It was never just about bikes. We want to change lives" - Mwewa Chikamba, Zambikes co-founder

"The only criticism I've had is that they might be too cheap.

"After all, buyers are helping to get self-sustaining businesses off the ground in developing economies, and they're getting a unique bike into the bargain."

The mood is optimistic at Zambikes too.

"I can see these selling well in America. They'll like them because they're natural," he says.

Mr Machilika lived in a tent on the site for a year while the workshop was being built.

A quick learner, he soon mastered construction skills and bike mechanics. Now he oversees day-to-day running of the workshop.

Benefit to the community

One of the founders, Mwewa Chikamba, says Mr Machilika is an example of what Zambikes wanted to achieve.

"It was never just about bikes. We wanted to give our workers practical skills and reward their dedication. We want to change lives," he says. 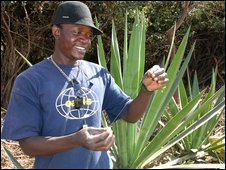 A worker with some sisal. Sisal is another plant used in the bamboo bike which is grown locally.

Assistance is also offered in the form of business coaching or discretionary loans - Mr Machilika used one such loan to buy a plot of land.

"I want to build three houses there. I'll use the rent money to start other businesses and employ people myself."

Instead of charging interest, Zambikes asks staff to demonstrate that the investment made in them is benefiting their community.

Perseverance and an innovative approach to product design and working practices have helped Zambikes put down strong roots.

But in a business environment that leaves much to be desired, it is no surprise that they have not yet seen a profit.

If the bamboo bike shoots out of the shops as fast as Mr Calfee predicts, that may be about to change too.

Re: Bamboo bikes of Zambia

what a great material...as far that i know,bamboo is very tahan.Can use for very long time.
Top

Re: Bamboo bikes of Zambia

Users browsing this forum: No registered users and 1 guest